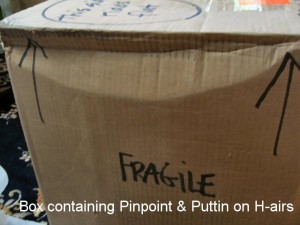 I had 5 pieces in an exhibition in New York. After the show was over and the gallery shipped it back, the work was stopped at the border. Customs would not release it until I paid a brokerage fee.

I called Canada Customs and explained that I owned the work but it seems that they don’t have a way to handle this. There was a value placed on the work so there was duty. In the end I was told that the only way to avoid duty is to broker it yourself.

When I shipped the work to New York I used an art shipper. Actually 2 art shippers; one from Calgary to Toronto, then handed off from Toronto to New York. They took care of everything and all the costs were quoted up front. It was expensive (close to $800 for 5 pc’s) but it arrived all very safe and sound.

I believe the trouble I had on the return delivery was because the gallery shipped my work FedEx Ground! Why is still beyond me, this was a very reputable gallery who ships work back and forth all across America but not that often across the border. Had they used a bonafide art shipper I don’t believe I would have had the problems I had.

Did I mention that all the work can back DAMAGED!

They even managed to break a wood 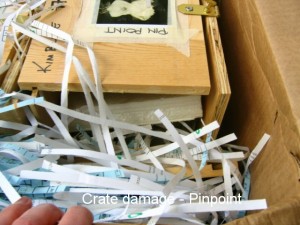 crate. That’s because they shipped via ground and my work was bounced all around the U.S. before it even managed to reach the border. You can imagine how my heart sank when the work finally arrived 2 weeks later.

I hear a lot of stories about damaged art and all the artist can do is throw their hands in the air in defeat. I thought that I was going to be one of those but the gallery owner really came through for me. He fought tooth and nail with FedEx and managed to get me a settlement. They also sent me the encaustic that I would need to repair the work, which I was able to do.

The typical scenario is that the artist pays to have the work shipped there and the gallery is responsible to incur the cost of the return. Perhaps it would be prudent to discuss the shipping methods up front before entering into a contract.